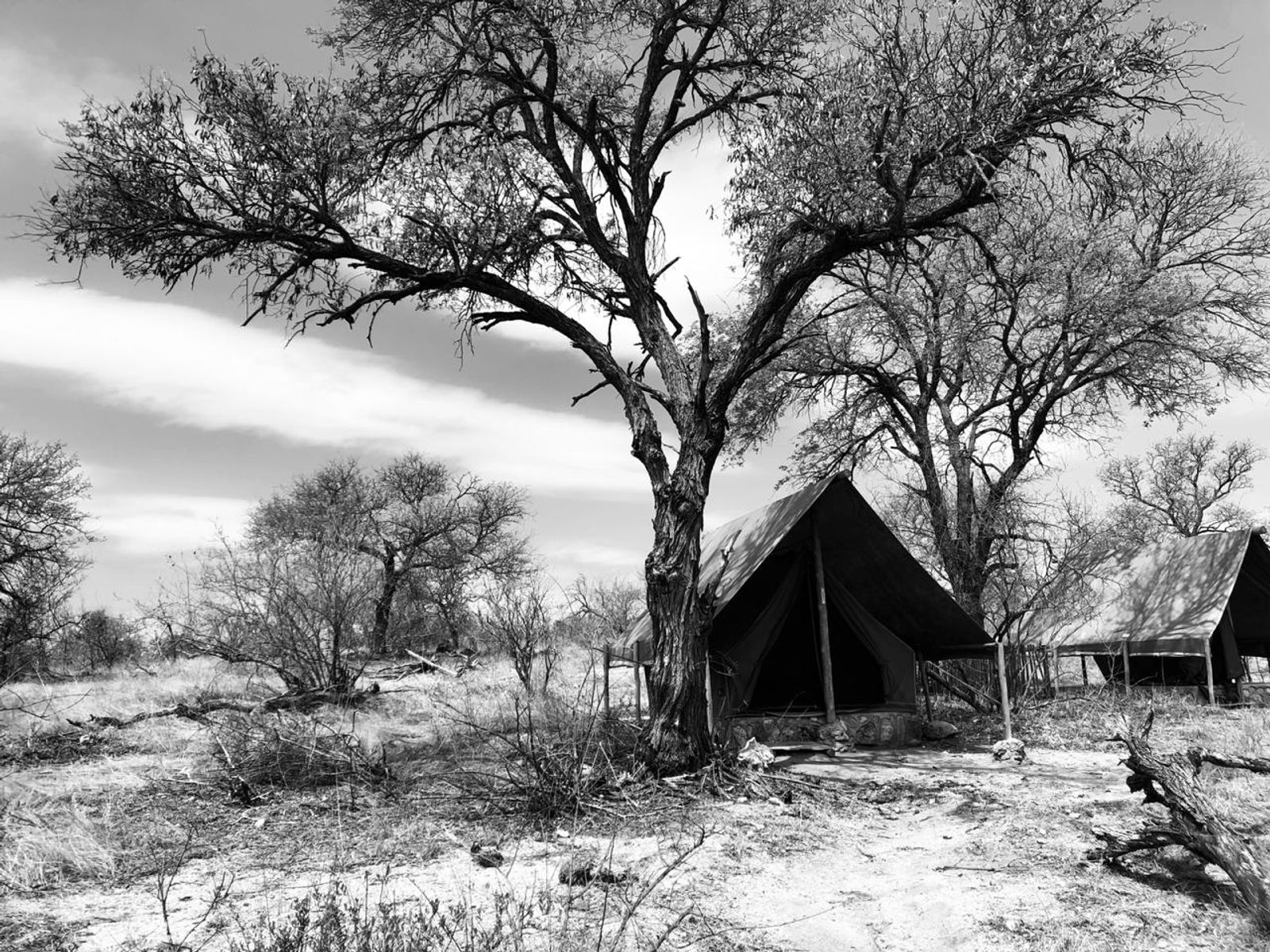 Late 1980s: First steps in a career in wildlife

After finishing school in the Eastern Transvaal, Marinus enlisted in the army where he spent two formative years. Battling with dyslexia, his academic years were a challenge, so he embarked on a practical path that would incorporate his natural skillset and innate knowledge and passion for the outdoors. He and his father – a Forester – started a small fish farm in Pongola. In those days, game farms were used for hunting than far more than for photographic tourism, and there was a hunting farm on the neighbouring property. Marinus began working on the farm part time and quickly learned the ropes. He progressed and qualified with a professional hunting licence; his ticket to a career in the bush.

In the late 1980s, Marinus was working at Mkuze Falls for Anton Marais, a relationship that led him northwards to the Zambezi Delta of Mozambique. The country was still in a state of civil war when Anton acquired a concession in Marromeu – wild, unchartered territory – and assigned Marinus to build a camp there.

And so, it was. Between 1992 and 1994, Marinus worked with a team of local Mozambicans to build roads and develop the rural Marromeu concession. It was during these years when he was spending time on end in the “bundus” that the seed for the name Bundox was planted. It would be another few years until Marinus’ game capture career took off, but when it did, he looked back on this time in the bush for inspiration. Just like the fond American term “boondocks”, “bundus” refers to wild, isolated back country. The word Bundox is an evolution of this African colloquialism, moulded by the way the Mozambicans pronounced it.

“Bundox,” they said, and it stuck.

By 1996, the demand for game capture and relocation was growing. Phinda Private Game Reserve was established, and the plan was for Mkuze Falls to follow suit, just as soon as it had a greater population of wildlife. These areas had an abundance of nyala, while farmers in Limpopo were experiencing problems with local leopards. And so, the opportunity to capture and move game presented itself.

Marinus took the plunge and launched Bundox Game Capture with one vehicle and a single dart gun. A long relationship with Phinda began as he mastered the art of capturing and moving nyala to the Lowveld and giving problematic leopards a new chance in the protected areas of Kwazulu-Natal.

During the years that Marinus was moving game between emerging parks in South Africa in the early 2000s, he met an integral member of the Eko Wild team: Ida Steenekamp, who would later become Ida Smith.

Ida worked for the region’s well-known wildlife vet, managing the reception and bookkeeping of the practice. At that stage, Marinus was working in the field every single day. Their paths crossed regularly, as frequent captures and translocations were taking place. Soon enough, the couple were navigating the complicated lifestyle and long hours that go along with the game capture trade, trying to see each other whenever time allowed. It didn’t take long for Marinus to propose an engagement to Ida, urging her to give him a shot!

Eventually, a surprise marriage on a famous mountain at Phinda convinced her to say, “I do.”

It was Friday the 13th in 2005, and Marinus had enlisted the help of a friend to sell a story to Ida that would convince her to climb a koppie (in heels)! The ruse was that there was a partially sedated lion that had taken off up the hill and needed to be located and darted. Marinus knew that Ida wasn’t going to sit out an exciting search like this, whether she was dressed for it or not, and sure enough, she took the bait! As they reached the top, still searching for the imaginary lion, Ida was handed a bouquet of roses and the puzzle pieces came together.

Mr and Mrs Smith were the third couple to get married on Mount Nkosi, and only the wilderness was there to witness it. It remains the most romantic tale in game capture history!

Ida joined Marinus at Bundox, and the company truly began to take flight. Commercial game reserves spread throughout the country and wildlife translocations were in high demand. Developing a powerful partnership in both life and business, Marinus focused on the physical work of game capture while Ida brought order and efficiency to the operation. Together, they established the dynamic brand that grew and evolved from successful game capture and conservation programmes, to versatile safari tourism in the Greater Kruger.

2011: The birth of Wildside Africa

In 2011 and 2012, Marinus and Ida were running a game ranger experience programme in Mapungubwe, right in the north of South Africa’s Limpopo Province. They were facilitating projects for research students and volunteers who were travelling to Africa with a desire to work in wildlife conservation or enhance their environmental studies.

The name Wildside Africa emerged during one of these trips to Mapungubwe – a place rich in natural and archaeological heritage. An appreciation for remote, untouched wilderness areas is something Marinus and Ida have always instilled in their children, so when their family was sitting on top of a koppie one evening in this spectacular part of the country, the natural scenery spoke to them all.

“Why don’t we call it Wildside?” Marinus suggested. And just like that, their budding conservation and tourism business had a name.

Around the same time, Marinus began suffering from severe allergic reactions, which were then undiagnosed. Bundox Game Capture was thriving, and Wildside Africa had taken off with enormous popularity. Being driven and hands-on, Marinus played an active role in developing both businesses from the ground up. He was performing game capture operations for a number of years, and over time, he started developing an allergic reaction to the animals that ultimately caused his lungs to collapse.

There was no option but to put Bundox Game Capture to rest and to evolve a vision for ecotourism, taking Wildside Africa in a new direction.

In 2014, when Marinus was still grappling with health concerns, Wildside Africa acquired its first tented safari camp, in partnership with Terry Schultz. Indawo Trails Camp was plotted out and constructed on Terry’s concession in the Greater Kruger’s Balule Nature Reserve and it was envisioned as a rustic, off-the-grid base camp for walking safari enthusiasts who wanted to experience raw nature without any superfluous extras.

In 2015 when Marinus and Ida exited the game capture industry and were looking to vault into the ecotourism sector with renewed focus, the decision was made to leave Indawo to Terry while they took up business opportunities in Botswana. (This wouldn’t be the last of Indawo, and five years later, it would re-emerge as Bundox Explorer Camp, offering simple, eco luxury in premier safari territory.)

Meanwhile, Wildside Africa set up roots with its first safari property in Botswana: Mankwe Bush Lodge, located on the Kgori Safaris concession on the eastern boundary of Moremi Game Reserve. Identifying with the concept of an experiential safari, Wildside Africa was building relationships and developing products to ensure the greatest exploration of the safari landscape, whether that be by boat, on foot, or in a traditional safari 4x4. Opportunities to develop Wildside Africa emerged and soon it could offer guests travelling on an intermediate budget the chance to see and experience the best of Botswana.

This became the company’s identity: offering economy travellers comfort and convenience and a quality wildlife experience in some of Africa’s most iconic destinations.

But one year after Mankwe was introduced to the public, disaster struck. A fire took hold of the lodge and burnt it to the ground.

On 31 July 2016 – the day before Botswana’s peak safari season kicked off – a fire broke out at Mankwe and burnt the main lodge, swimming pool, kitchen, and bar to the ground. The whole structure succumbed to ash in a matter of 35 minutes. To add insult to injury, the lodge had just finished being entirely revamped and was ready to reveal a fresh, new look to guests.

Fortunately, no one at the lodge was in danger, as it had been closed for renovations. The heat of the day and highly flammable material, like thatch, wood, and reeds, encouraged the fire to burn extremely quickly. Gas bottles exploded and flames engulfed Mankwe as staff members looked on. Marinus and Ida were in South Africa and received the devastating news by phone call. A big blow.

The team acted quickly to handle future guests’ travel arrangements and they did what they could with what was left at Mankwe. Fortunately, the tents were saved from the fire, so a temporary fix of the main lodge could keep Mankwe afloat for two years while Marinus and Ida waited for the rebuild permit to come through.

In February of 2019, the lodge closed for a long-awaited renovation and is due to open in April 2020! Enormous work went into rebuilding Mankwe in its entirety and applying the vision that Wildside Africa has nurtured over the last five years. Mankwe’s new opening is symbolic of rising from the ashes, overcoming adversity, and being determined to bring a dream to life.

Wildside Africa’s license to operate in Botswana also came through in 2019 – a huge milestone and mark of legitimacy that will allow Marinus, Ida and their partners to take their vision to the next level. Bundox Explorer Camp is set to open its canvas doors in 2020 as it re-emerges as a brand new eco luxury location.

We can’t wait to welcome our guests to a new and exciting era, as plans for growth and expansion are well under way. Come and experience our Africa!